Business Is Booming In Uptown Greenville

Falling Through Time to B’s Barbecue 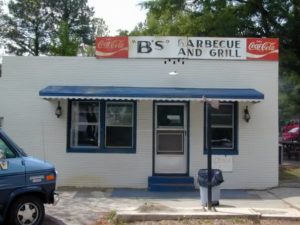 The story of “A Day at B’s Barbecue” is a captivating look at an unassuming North Carolina landmark and the pork barbeque that made this small North Carolina business famous. It’s a great read and I highly recommend it.
https://www.ourstate.com/a-day-at-bs-barbecue-greenville/

Little Washington is full of beautiful old buildings and creative people using them in creative ways.

When Rachel Midgette and her mom started Rachel K’s Bakery, they were cooking out of a small kitchen in their home. Today they are housed in Little Washington’s original Town Hall and Fire Station, a building built in 1884 that had sat vacant since 1982. Rachel K’s Bakery breathed new life into this old building and today the old Town Hall is more than just a place to get delicious breads, pastries, and coffee. It is a sweet smelling meeting place for community to connect, housed in a rescued beauty of a building.

The Turanage Theater, art galleries, restaurants, bookstores, and clothing shops — all housed in a variety of interesting buildings, old and new — are highlighted in this wonderful video showcasing the charms of Little Washington. To see more about how commercial investors and business owners co-create a lovely little town, support North Carolina creators and create North Carolina businesses, check out this video. But be warned, you may want to move to Little Washington! 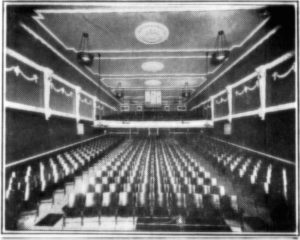 Helping businesses and cities rescue historic spaces like the abandoned White’s Theater in Uptown Greenville is one of the ways that Ron Harrell & Associates is helping to revitalize our fair city. White’s Theater is a cultural cornerstone of Greenville. It was built by Samuel Tilden White in 1914 and until 1926 it hosted a new and innovative and art form called “moving pictures”.

The first of many remodelings took place in 1930, and included an electrifying addition — sound equipment. The newly named State Theater hypnotized Greenvillians with an entirely different kind of film — the talkies! Movies with sound. 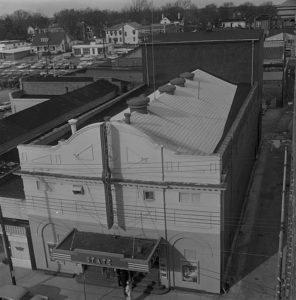 Over the next 60 years the theater evolved, devolved, and changed hands several times. As The State Theater, it operated until 1956, patrons enjoy phonograph records during intermission, until it was supplanted by two other increasingly popular pass-times — “television” and “drive-in movies.” After it closed, the once grand theater sat empty for four years.

Stewart & Everett reopened “The State” in 1960 and in 1971 commissioned an extensive remodel and renamed it “The Park”. Around 1982, The Park became a $1.50 “second run” movie theater. Carmike took over in 1986, raised weekend prices to $2.00 in 1996 but by 1998, movie goers were finding themselves drawn to “megaplexes”, more plush theaters with better technology. In 1998, the theater closed again, this time seemingly forever. This important piece of Greenville’s history sat empty, abandoned, decaying, for 20 years. That is, until a dedicated group of arts lovers, historians, and dedicated citizens committed to raise the money to save and re-open the theater. Through the efforts of many in the Greenville community, the new Uptown Theater, a multipurpose community performing arts center, is slated to re-open in 2017!

If old buildings could tell stories, White’s Theater, now Uptown Theater, would be the story of changing technologies, changing communities, and the changing nature of modern day story-telling.

Read more about the renovations here:

Welcome to our new site!

Greenville, NC is the fourth fastest growing city in the nation! It has blossomed from a small city with a small university and a small hospital to the tenth largest city in North Carolina. That small university and small hospital have grown into a nationally recognized university and a hospital that trains doctors from around the world. Greenville itself has tripled in size in just the last thirty years and for twenty-five of those years Ron Harrell & Associates has been helping many commercial businesses and physicians find, purchase, lease, and build many of Greenville’s most successful businesses.

Greenville’s economy is booming. Forbes Magazine ranked Greenville in the nation’s top ten “Best Small Places For Business And Careers”. Our “small place” has it all. It’s business-friendly, with bountiful job opportunities and lots of reasonably-priced housing. It is also chock full of art, music, and nature. Click the link below to enjoy a taste of life in Greenville.

You have to be logged in to use this feature.